Their juggling is mind-boggling, their comic timing is amazing… our crew loves them as much as our audience does. You can’t miss with The Passing Zone! – Lakeside Chautauqua, Lakeside, OH

Brilliant juggling sequences as well as comedic bantering and hilarious one-liners, they are worthy of rivaling such greats as Martin and Lewis or Abbott and Costello. – The Mustang Daily, San Louis Obispo

A thrill for the audience, a publicity dream, and a technical wonder – The Passing Zone has something for everyone. – Cerritos Center, Cerritos, CA

Perfect for all ages – ideal for an evening of great laughs and awe-inspiring entertainment shared with family and friends. – High Point University

Entertaining, comical, jugglers extraordinaire… time with them was time in the fun zone. Too bad it was only for one night. – Dayton Daily News

They went above and beyond for our marketing team… everyone in the facility remarked on their fantastic showmanship and personalities. – The Lincoln Center, Ft. Collins, CO 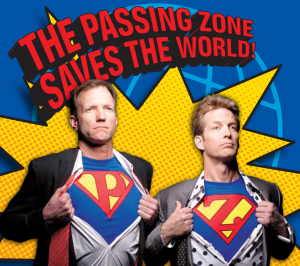 Can Jon Wee and Owen Morse save the world through laughter and dangerous stunts? It can’t hurt to try, so that’s exactly what they are going to do!

The Passing Zone has been wowing audiences for decades with hilarious, award-winning performances. They have been finalists on America’s Got Talent, they have performed at the White House, and they hold 4 Guinness World Records. Their combination of comedy, dexterity, danger, and hilarity has audiences on their feet all across the globe.

And now, with The Passing Zone Saves the World, Jon and Owen put the world’s troubles on their shoulders, and attempt to save us all! How do they do it? By temporarily suspending gravity. By turning chainsaws into dance partners rather than tools for wiping out rain forests. Through infectious laughter, not infectious disease. Imagine a show without hatred, ignorance, and bigotry! Are they superheroes? Or are they just a couple of talented guys who will make you forget your troubles and laugh til your face hurts? Either way, the world becomes a better place while these guys are on stage. So whether your favorite part will be the stun gun, the chainsaws, the superhero capes, or the ping pong balls- save the date, because there’s nothing more important than saving the world.